The City of Asheville held a groundbreaking ceremony at 10 am on October 18th, 2021, for the new "Public Safety Station" that Gleeson Builders will construct at 316 Broadway Broadway Street. The new facility will contain a fire station, a relocated Emergency Operations Center, and - the subject of protesters' ire - a police substation. The new station will be approximately one mile from the existing downtown substation at Court Plaza.

Protesters demonstrated at the event with a banner that reads "Fund Community Not Cops" and "Defund AVLPD." There was also a car caravan playing loud music as it circled the event.

In November 2019, City Council authorized a $407,567 contract for the design of the station. In late July 2021, the council voted 6-1 (Roney opposed) to approve $11 million for the facility's construction. At that meeting, some residents spoke out against the police substation planned for the facility.

It seems about half of that $11 million is going to go to the police station - members of the community demanded to defund APD by at least 50%, so the money that's being poured into the police station could be used for low-barrier shelters and other social services that keep people - a majority of them Black and brown - out of the prison industrial complex.
- Mel Noyes, at City Council Meeting 7/27/21

The city predicts that the construction of the facility will be complete in December 2022. 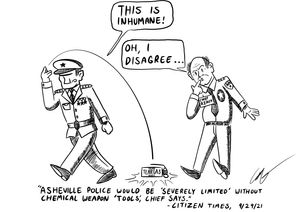