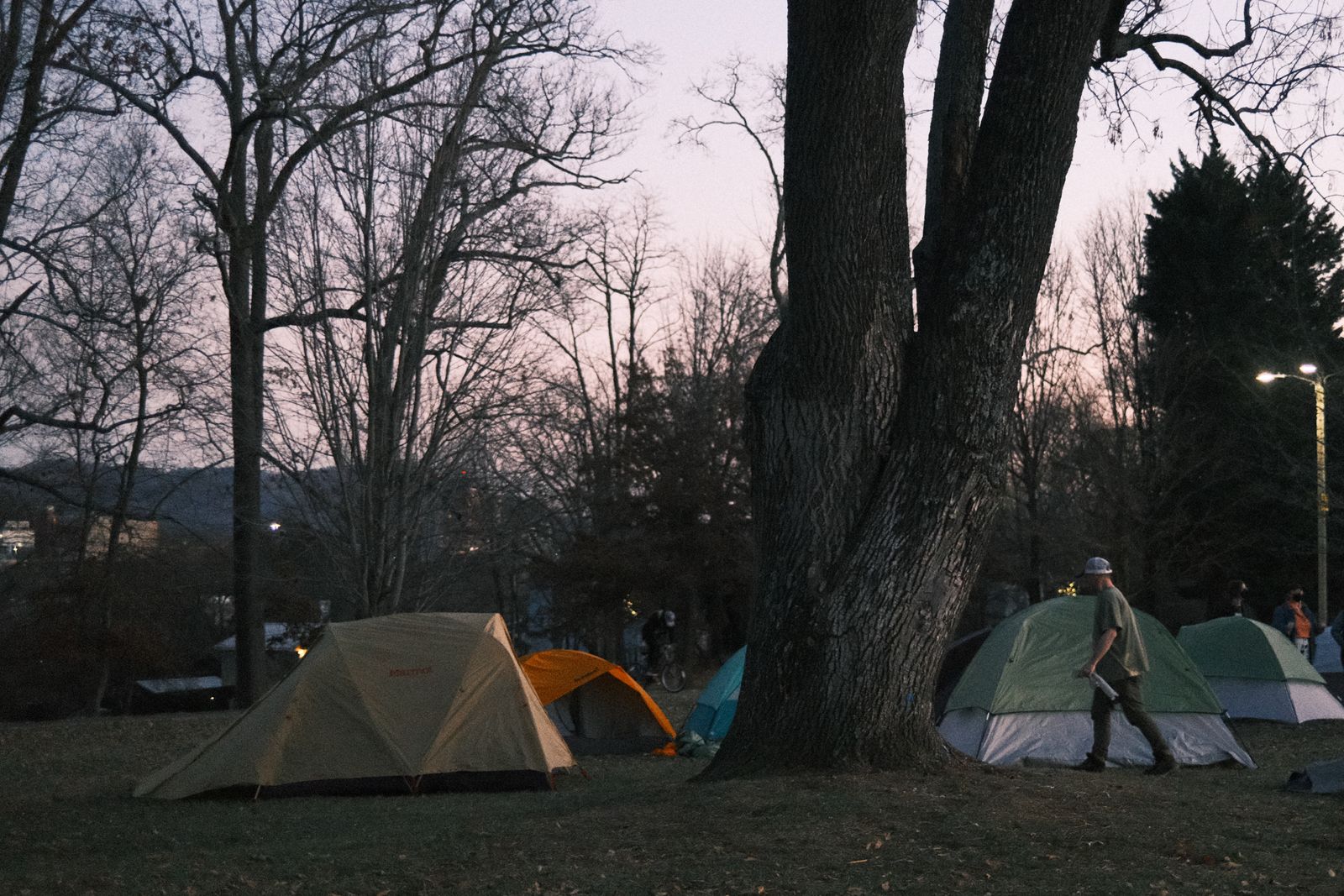 On February 1, 2021, Asheville Police and the North Carolina Department of Transportation (NCDOT) collaborated on removing an encampment set up by unhoused residents under the I-240 bridge on North Lexington street.

This move sparked outrage in the community, leading to dozens of angry public comments and a sharp rebuke posted on social media by Asheville nonprofit BeLoved, who stated, “THIS IS IMMORAL, DEEPLY TROUBLING, and potentially DEADLY to take people’s shelter in the winter in the midst of a health crisis.”

While City officials took rhetorical steps to distance themselves from the camp clearing, the practice continued throughout the year.

A spreadsheet obtained from the sanitation department via public records requests documents an ongoing collaboration between that department, Asheville nonprofit Homeward Bound, the Parks & Recreation department, and Asheville Police to address camps around the city. The document contains more than 60 entries in the seven months between May and the end of the year. Each entry details the location of a camp, suspected camp, or camper and the measures the organizations above took to address them.

Most entries in the document detail situations where only a single camper was reported, none at all, or where the follow-up thread seems to have been lost, and no clearing was documented. We have not included those in our count or timeline. We are counting camps where more than one person resided, and they were instructed to move.

Combining this number with the high-profile instances that have made it into the local media shows 26 camp evictions in 2021. Due to incomplete documentation and the inherent difficulty of neatly defining what constitutes a  “camp” or “eviction,” this is likely an undercount.

A Timeline of Known Camp Evictions in 2021

Note: some dates are approximate due to inexact reporting in source documentation.

June 10, 2021 (approximate) - Four people were evicted by DOT while camping near the Ramada Inn. According to documentation, they were “waiting for a spot at the Ramada Inn.”

June 24, 2021 - Campers at Food Lion Skate Park parking lot on Cherry Street, the Parks Department told them they had to leave.

July 1, 2021 - Three people were sleeping in the pavilion walkway at Pack Square Park. Parks dept called APD, who gave them a written warning for trespassing.

July 1, 2021 - Three people were sleeping along the fenceline of ballfield at MLK park. The Parks Department told them they had to leave.

July 7, 2021 - Four people were living in a car on Craven Street. APD officer Rose responded, had campers physically move their vehicle, which did not run.

July 21, 2021 - The Parks Department was informed of multiple camps along the river behind soccer fields at Azalea Park. APD removed campers.

August 10, 2021 - Campers at Riverbend Park were told on August 3 by the Parks Department that they had to leave. According to documentation, outreach visited on August 10 and spoke to two people, both “aware of evictions and preparing to move.”

August 18, 2021 (approximate) - Campers living in an RV moved from Craven St to NCDOT property nearby, “Issue resolved by DOT/APD” according to documentation.

August 27, 2021 - “APD and Parking Services to issue trespass notices and impound vehicles if needed on NCDOT property near the intersection of Park Ave. N. and W. Haywood St,” according to documentation.

September 14, 2021 - The Parks Department discovered campers at Aston Park. “Officer Hawes and Sgt. Lovelace came and took care of the situation,” according to documentation.

September 15, 2021 - The Parks Department found two campers in a tent on Craven St. One camper “said he wasn’t leaving and that he didn’t care what we said and started to argue, so I called APD,” according to documentation.

December 9, 2021 - Outreach connected with individuals in two tents under I-240 (N. Lexington Ave.) and alerted them that they would be asked to leave because they were on NCDOT property.

Why is the City of Asheville Clearing These Camps?

Between Asheville App complaints, official City statements, and the document as mentioned above, there are a few recurring themes in the justification for removing these camps against CDC guidance: trespassing, trash, sharps waste, and individuals becoming angry when approached by officials.

“The hygiene excuse is an old tactic to harass people living in poverty,” said Hill Brown, the former director of Steady Collective. “Of course, the real public health concern as it relates to folks sleeping outdoors is that humans are being exposed to the elements day in and day out.”

Melanie Noyes, a member of the Human Relations Commission, also pushed back on these justifications.

“Unsanitary conditions are not reasons to remove encampments; they are excuses to keep poverty out of sight and out of mind,” Noyes said. “Not only has the CDC advised municipalities to leave encampments alone during a pandemic, housing activists have tirelessly advocated for sanctuary camping, a proven method in other states, which includes 24/7 basic sanitation. And I can only speak from a place of empathy here, but if I were a houseless person being approached by officials to move my place of living, it would be only natural to feel a boundary is being crossed – and anger would be my natural emotional response.”

On June 7, 2021, Homeward Bound outreach coordinator Robert Stevenson wrote that he’d visited an encampment at Pritchard Park in the spreadsheet. “[I] spoke to three [white men] who were very frank about needle-use but also emphasized that they want to keep the space clean and pick up trash whenever they can. I called Hil [sic] w. Steady Collective to bring sharps containers for them tomorrow.”

Brown confirmed, “I did visit that camp. [...] Robert called me on multiple occasions to provide containers and help with pick up. I visited at least three camps at his direction. But it is my belief that by the time I was called, the city had already made up its mind that it would be evicting the campers I was going to visit.”

The Parks Department, Parking Security, and Asheville Police collaborated to evict that camp two days after Brown visited, on June 10, 2021.

Many of the spreadsheet’s entries say campers were already connected with AHOPE, a day shelter, but were either waiting for housing or refusing night shelter due to access barriers like having a pet.

“No viable alternatives are given to folks who need a high access shelter due to various barriers, and no place is safe within city limits for those who prefer to be outside,” Noyes said.

Community Members, Activists, Nonprofits, and Politicians are Calling for an End to the Camp Sweeps.

In May, the Human Relations Commission put forward recommendations that would preclude further camp sweeps. Per the Citizen-Times, those recommendations are still “in limbo.”

The Steady Collective, BeLoved, Asheville Solidarity Network, and City Council Member Kim Roney have all publicly called for an end to the camp sweeps on social media.

Kim Roney also put forward a motion to end the camp sweeps during the December 14, 2021, council meeting. No other council member would second the motion.

Some activists and unhoused community members took a more direct approach. They gathered at Aston Park for five non-consecutive nights the week of Christmas and attempted to establish the sanctuary camp they’ve been calling on the city to allow. What started as an “art party” culminated in Asheville Police arresting four activists and two journalists on Christmas night.

📰
We are 100% funded by community members like you. If you like what you just read, help us make more like it by becoming a patron.
Become a Patron!
WireUrsula Wrenunhoused communitycamp sweepsevictionHousingNewsunhoused
Share this article on: 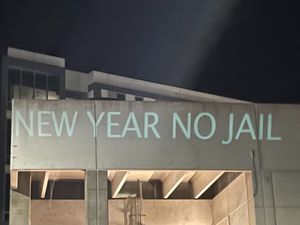 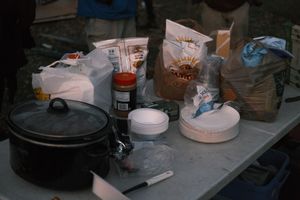